Developed by Seabourne Consulting, experts in Growth or Decline: Understanding How Populations Change

This article was written by  Luke T. Rogers and C. Peter Borsella for Random Samplings, the official blog of the U.S. Census Bureau. The original article can be found here.

With the release of the 2015 county and metro/micro area population estimates and components of change, we can explore the question – how did the United States population change in the last year? Demographers, researchers who study population change, begin to answer this question by looking at the components of change.  There are three components of change: births, deaths, and migration. The change in the population from births and deaths is often combined and referred to as natural increase or natural change.  Populations grow or shrink depending on if they gain people faster than they lose them.  Looking at an area’s unique combination of natural change and migration helps us understand why its population is changing, and how quickly the change is occurring. 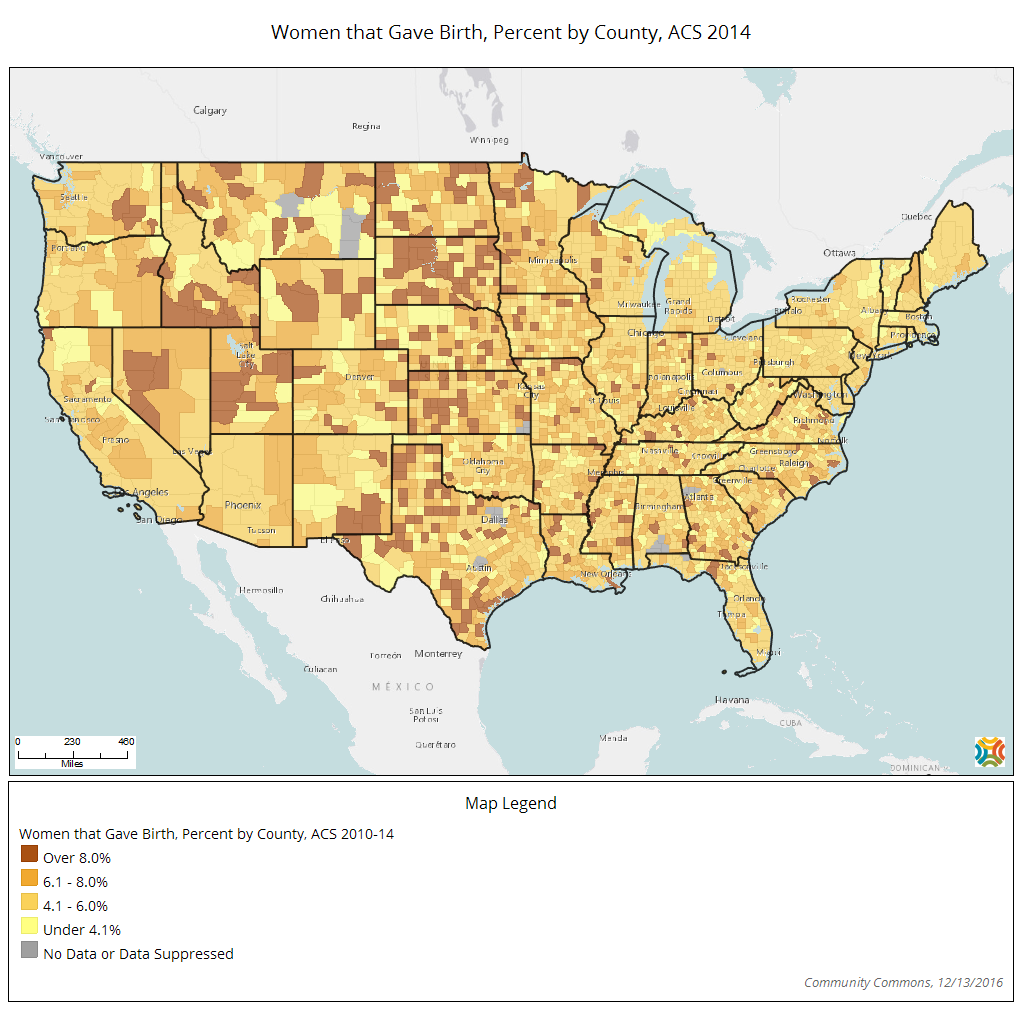 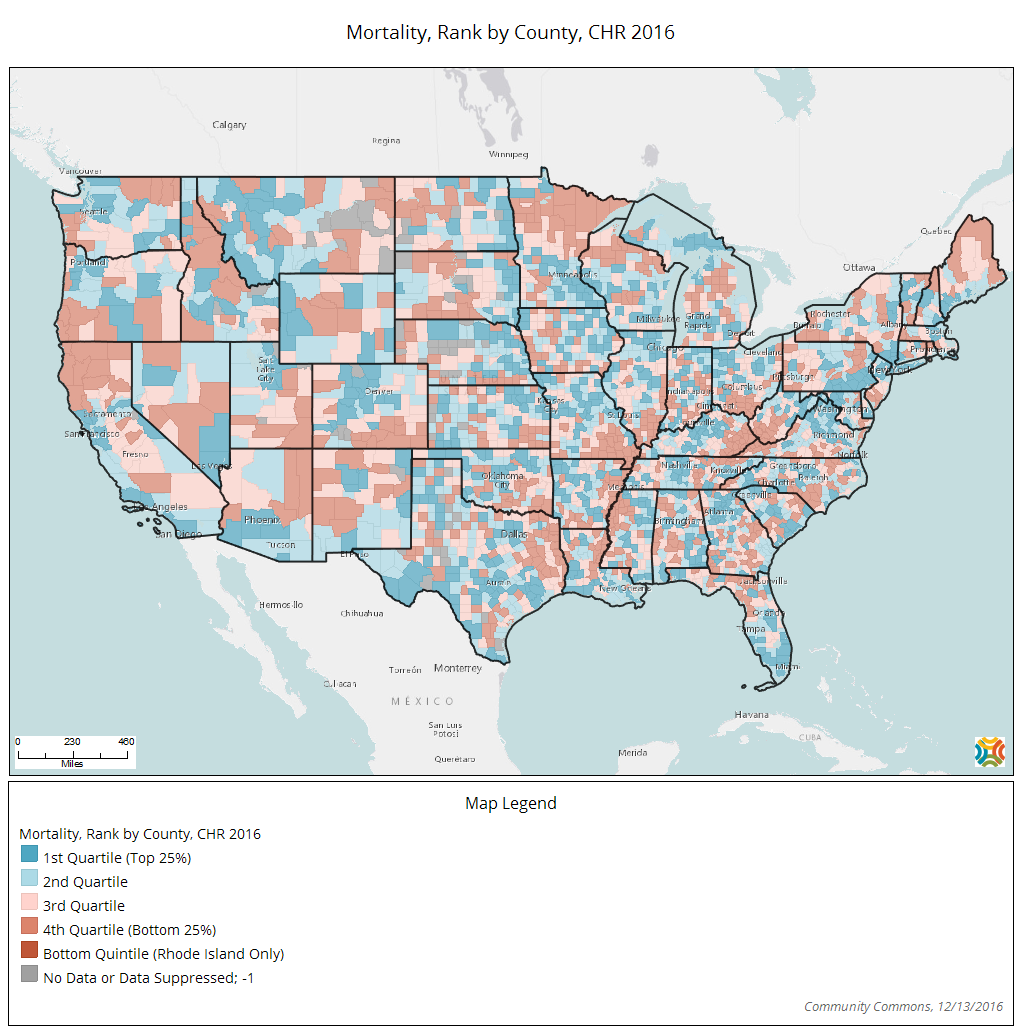 Migration is the movement of people from one area to another. It is often expressed as net migration, which is the difference between how many people move into and out of an area. When net migration is positive, a population has more people moving in than out. We split migration into domestic migration and international migration. 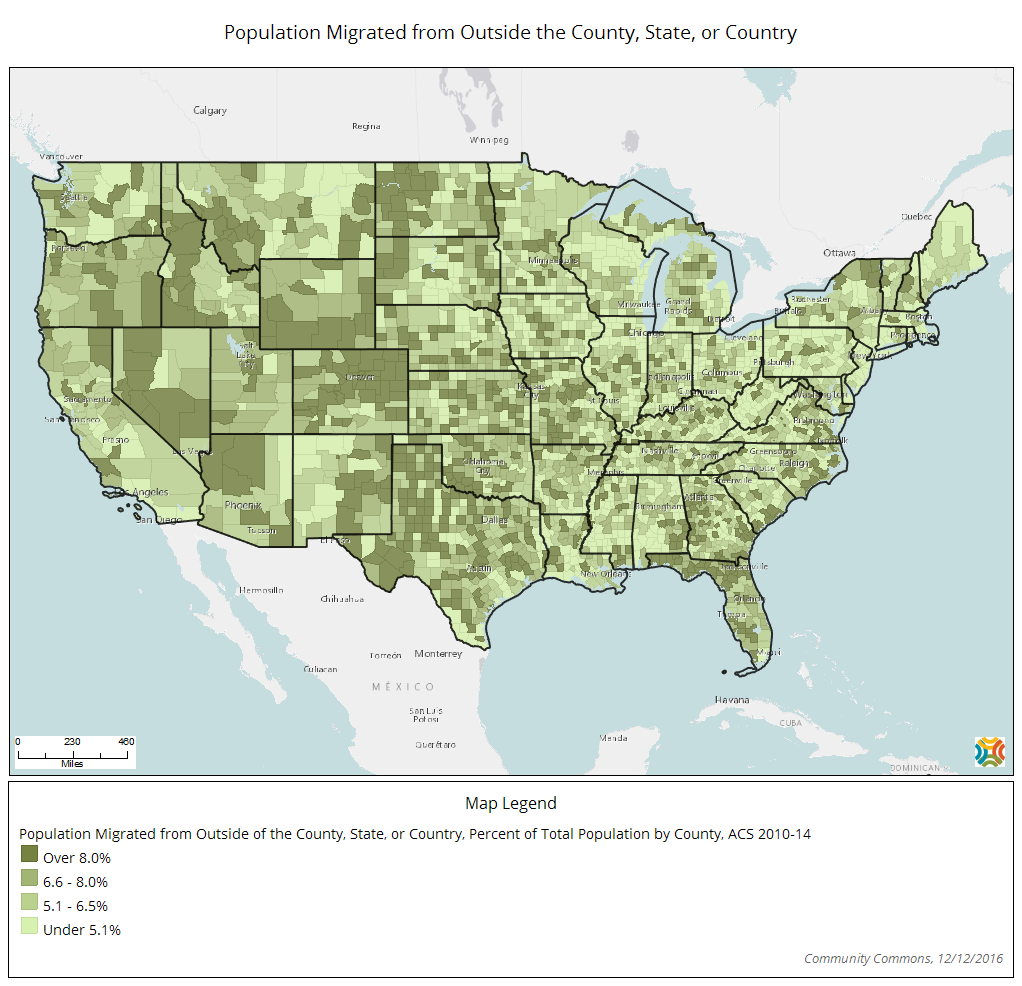 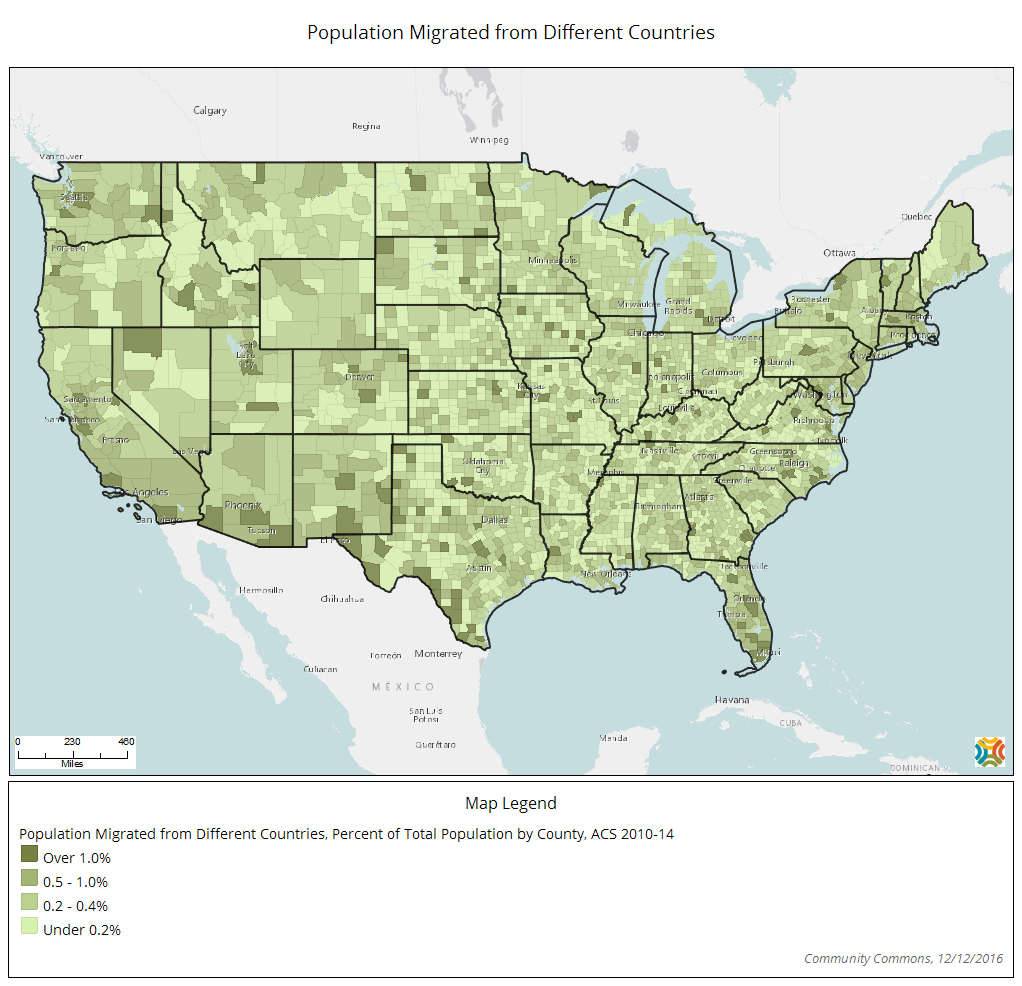 Analyzing the components of change is an enlightening way to understand how the U.S. population is shifting over time. Looking at counties across the country, we can identify clusters of counties that grow mainly due to migration and others that grow due to natural increase. Clusters seen in areas like Florida and Texas, which grew primarily due to net migration gain between 2014 and 2015, are visible in Map 1. Other clusters shown in Map 1, such as those in California, Utah, and along the east coast from Virginia up to New York, grew over the same span of time in large part due to natural increase. 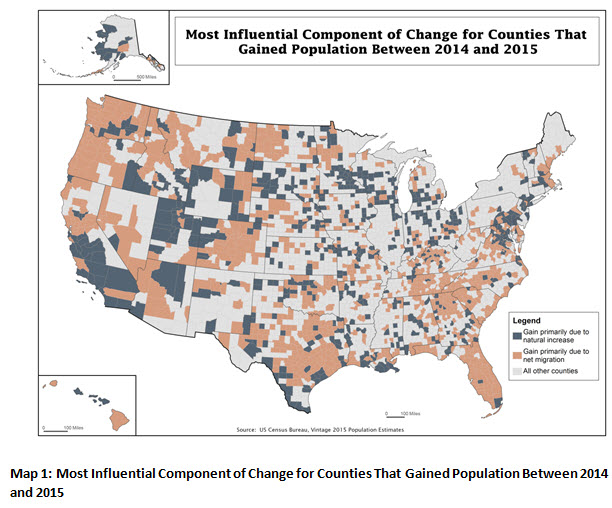 Counties with shrinking populations are also clustered geographically. For many of these shrinking counties, net migration is the primary cause of population loss. How these counties can cluster together is shown in Map 2, where several areas along the Mississippi River (Arkansas, Louisiana, and Mississippi) had net migration loss between 2014 and 2015. States like Illinois, Kansas, New Mexico, and New York also had several counties that lost population due to net migration loss. Areas that declined mainly due to natural decrease are similarly clustered, as seen along the Virginia/North Carolina border and in northern Michigan. 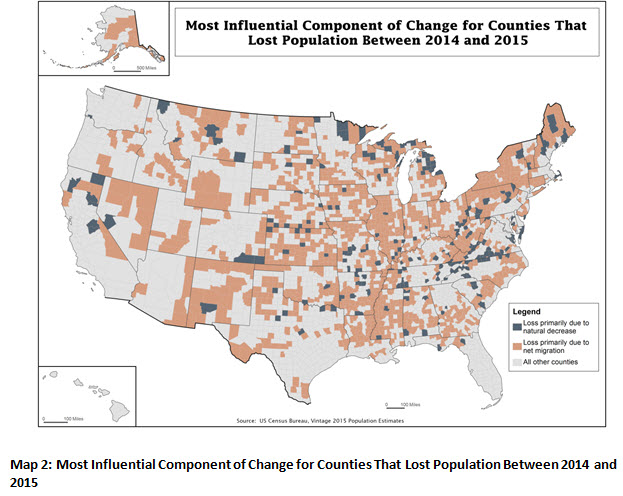 “Summing” It All Up

Overall, population grows or shrinks through two very basic components – natural change (births minus deaths) and migration (domestic plus international). As illustrated in this blog, the balance between these components is unique in each area, while following general patterns across states or regions. This balance gives areas their own unique story as they change over time. Through the production of annual population estimates, and the types of analysis provided here, demography continues to be an important, ongoing focus of study at the Census Bureau that contributes to our understanding of where we’ve been and where we’re headed in the future.

The Office of Management and Budget’s statistical area delineations for metro areas are those issued by that agency in February 2013. Metro areas contain at least one urbanized area of 50,000 or more population, and consist of one or more whole counties or county equivalents. Some metro area titles are abbreviated in the text of the blog.

The Census Bureau develops annual population estimates by measuring population change since the most recent census. The Census Bureau uses births, deaths, administrative records and survey data to develop estimates of the U.S. population. For more details regarding the methodology, see https://www.census.gov/programs-surveys/popest/technical-documentation/methodology.html 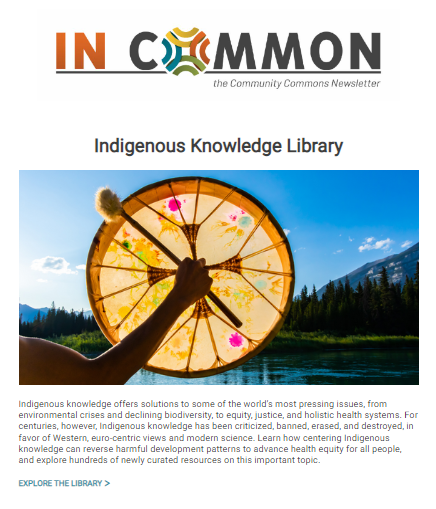