Developed by Seabourne Consulting, experts in Learning from the Past and Creating New Legacies of Equitable Vaccination

Learning from the Past and Creating New Legacies of Equitable Vaccination

Image by torstensimon from Pixabay

The recent approval of COVID-19 vaccines is a turning point in this pandemic and an historic achievement. The fastest vaccine development in history—efforts to identify the novel COVID-19 and develop a usable vaccine took about a year, and involved collaboration of scientists all over the world.

Vaccination is a triumph of public health. Through vaccines, smallpox has been eradicated, wild polio virus has been nearly eliminated, and population levels of preventable infectious diseases like measles and whooping cough are at all time lows. Each season, flu vaccination prevents millions of influenza illnesses in the United States alone.

Learn more about the history of smallpox

The scale and urgency of COVID-19 vaccine development and distribution have been compared to that of the polio vaccine. The first polio epidemic in the United States began in 1916. Polio, an infectious disease primarily affecting children, plagued American communities for nearly four decades before a vaccine was available. During this period, public support for polio vaccine efforts grew, in no small part due to the influence of President Franklin D. Roosevelt. President Roosevelt fell ill with polio in 1921 and became permanently paralyzed. In 1938, he founded The March of Dimes which in addition to supporting polio patients, crowd-sourced funding for Jonas Salk’s eventual polio vaccine.

Mass inoculations against polio began in April 1955, led by state and local health officials, and by August of the same year an estimated 10% of U.S. children under the age of 12 (the focus population) had been immunized. New polio cases decreased dramatically in subsequent years. After its U.S. authorization in 1962, an oral polio vaccine was rolled out to the general public; over the next three years, 100 million people—more than half of the nation’s population at the time—would receive the vaccine.

The COVID-19 vaccine drive will need to reach a much larger population than did the initial polio vaccine drive, and characteristics of the COVID-19 virus and a burdened medical system add to the challenge. Past vaccine drives have relied on mass vaccination centers set up in stadiums and other public facilities, but the mechanism of COVID-19 transmission presents unique logistical challenges. The pandemic’s strain on the healthcare workforce also poses challenges in delivery.

Previous vaccine drives have been aided by swift, clear action by leaders. In anticipation of a smallpox outbreak in New York City just before Easter in 1947, the city health commissioner Dr. Israel Weinstein responded urgently, warning the public about the smallpox threat and calling for vaccination and revaccination with daily radio addresses and a city-wide poster canvassing campaign. As part of his advocacy, Dr. Weinstein vaccinated New York City Mayor William O’Dwyer in front of news media; reportedly, President Harry S. Truman was also revaccinated during the drive. Dr. Weinstein worked behind the scenes with the same doggedness as his public advocacy, acting to procure additional vaccine doses, initiate a tracing program, and mobilize a corps of civilian volunteers to deliver inoculations. In less than one month, six million New Yorkers were vaccinated and the smallpox outbreak was contained.

But, times have changed. Today, there is less social trust, more polarization, more disinformation, and many new avenues through which to spread disinformation. According to a recent poll by Kaiser Family Foundation, only 7 in 10 people say that they would definitely or probably get a vaccine for COVID-19 if it is determined to be safe by scientists and made freely available. About a quarter of people are hesitant about the vaccine, citing possible side effects, concern over the newness of the vaccine, lack of trust in the government to ensure safety and effectiveness, and concern about politics in the development process.

Read more about the history of anti-vaccination movements

Vaccine hesitancy is alarmingly high among Black adults, of whom more than one third say they probably or definitely won’t get vaccinated according to the KFF poll. Among vaccine-hesitant Black adults, half cite general distrust of vaccines as a major reason. This distrust is borne out of the ongoing legacies of racism in our medical system that has exploited and harmed black people since its inception.

Racism has been hardwired into vaccine development and distribution efforts. Racism mars the science of vaccines by upholding structures of privilege in terms of who gets funded to develop vaccines, and in what populations safety and efficacy testing occur. Racism fuels denialism—denial about black people being susceptible to polio, for example, and denial about polio outbreaks in certain black communities. And, of course, racism shows up in vaccine prioritization and delivery. About half of Black adults say they are “not too” or “not at all” confident that the current COVID-19 vaccine distribution efforts are taking into account the needs of Black people (52%).

Concern looms that vaccine hesitancy could result in inequitable and sub-optimal levels of vaccination that slow our recovery from the pandemic while widening health and economic inequities. It doesn’t have to be this way! We have the power to shift conditions and create new legacies of equitable vaccination. The CDC has adopted a prioritization framework to advance the equitable allocation of COVID-19 vaccines. The plan centers equity through principles of access for all, community-based partnerships and prioritization for marginalized and medically-underserved communities.

An efficient end to this pandemic is possible if our response is up to the challenge. As public health practitioners, we have a role and responsibility to promote trust in the COVID-19 vaccines. We hope you’ll join us in spreading truth about the safety and efficacy of the COVID-19 vaccines, and encourage people to get vaccinated when it is their turn.

Sara Ivey, MPH, MURP. Sara is an urban planner and public health practitioner based in the Pacific Northwest. She is a project manager for IP3 and contributing writer for Community Commons. 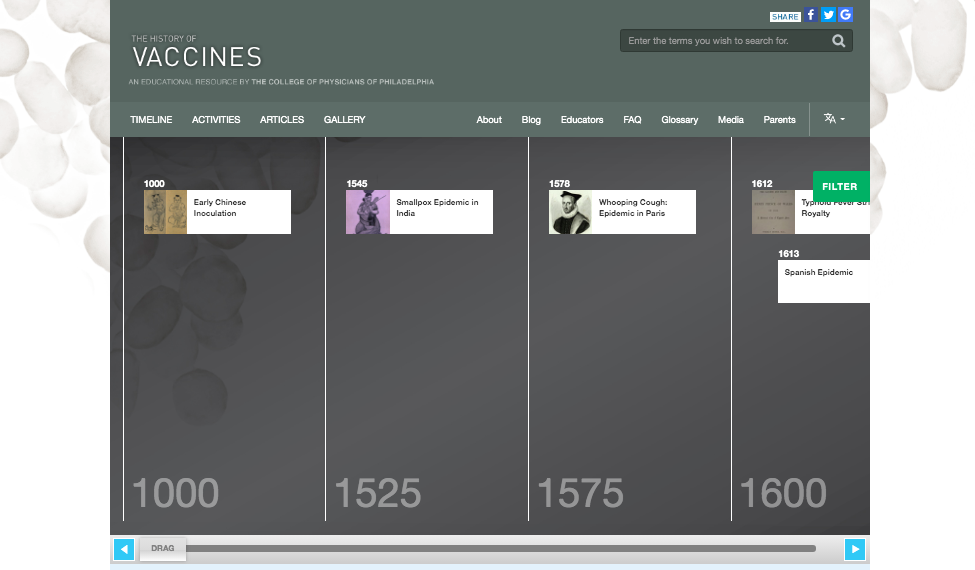 The History of Vaccines: Timeline

Brought to you by The College of Physicians of Philadelphia 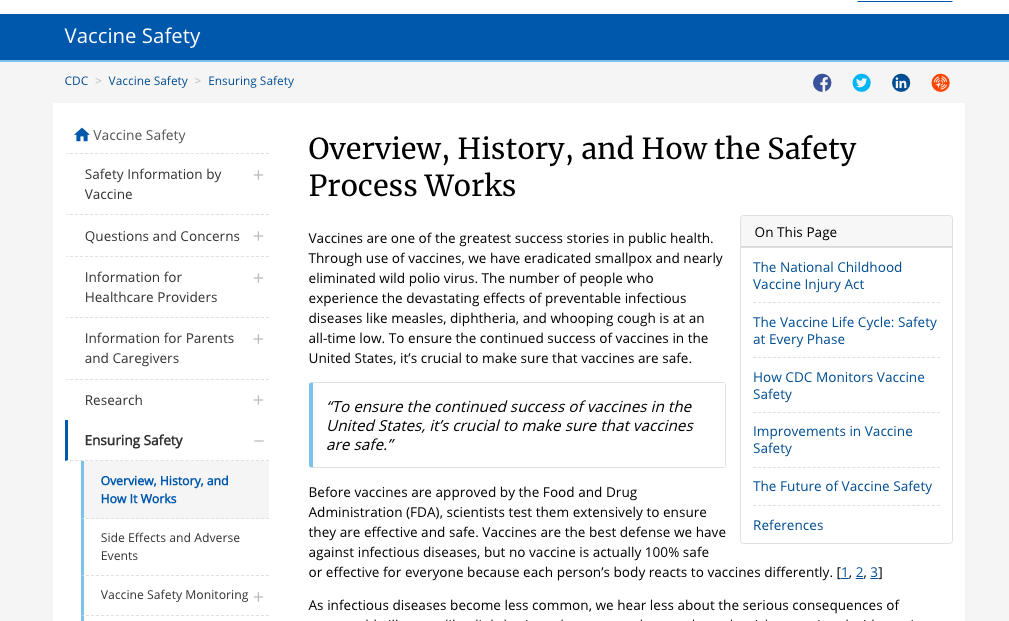 Vaccine Safety: Overview, History, and How the Safety Process Works

Brought to you by CDC 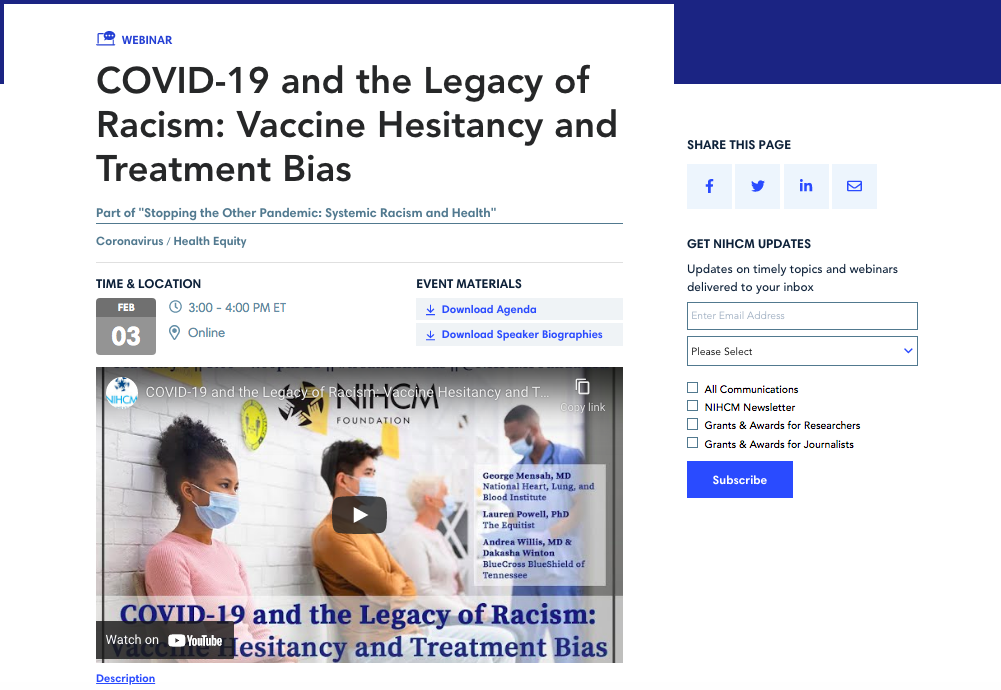 COVID-19 and the Legacy of Racism: Vaccine Hesitancy and Treatment Bias

Brought to you by NIHCM Foundation 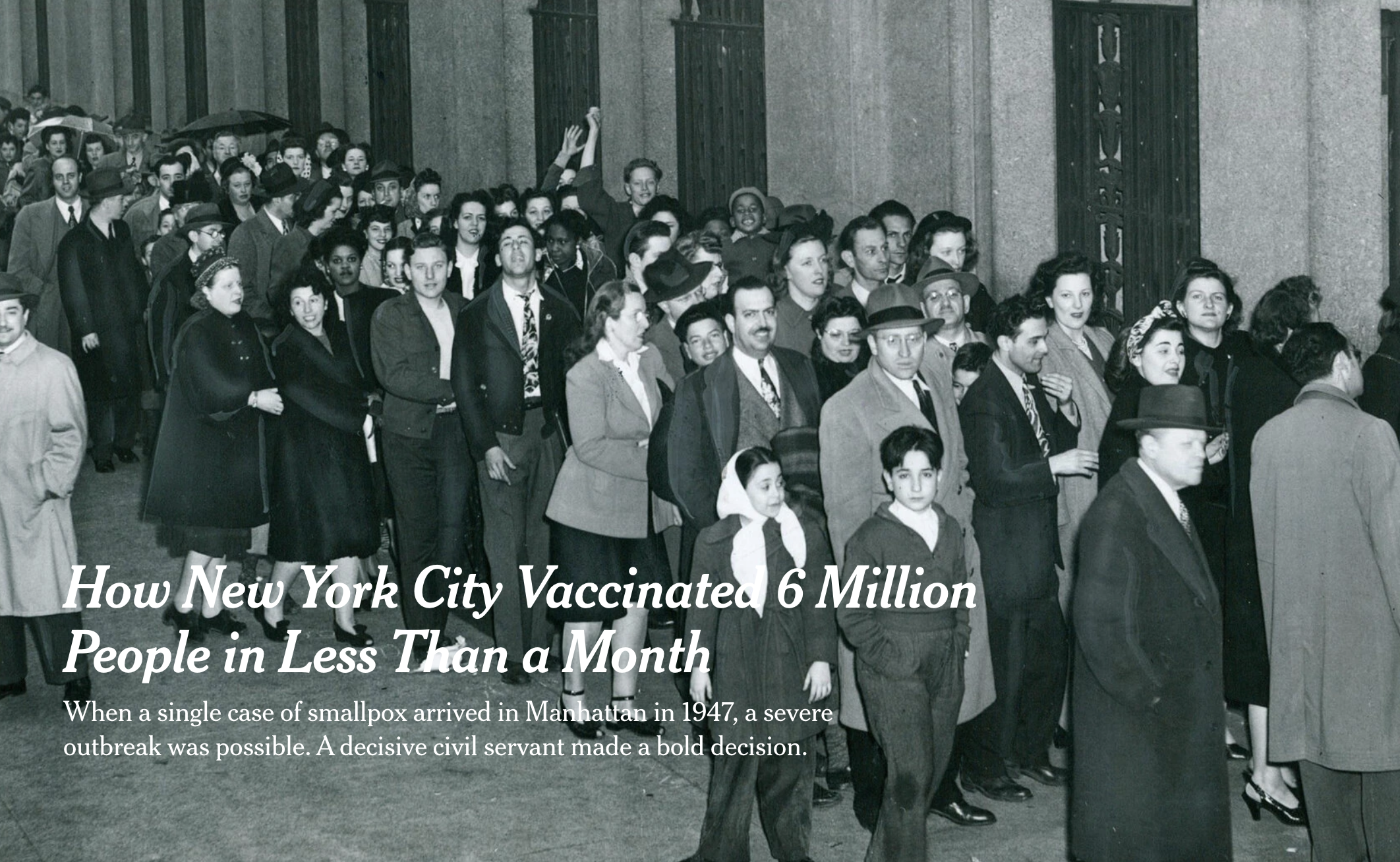 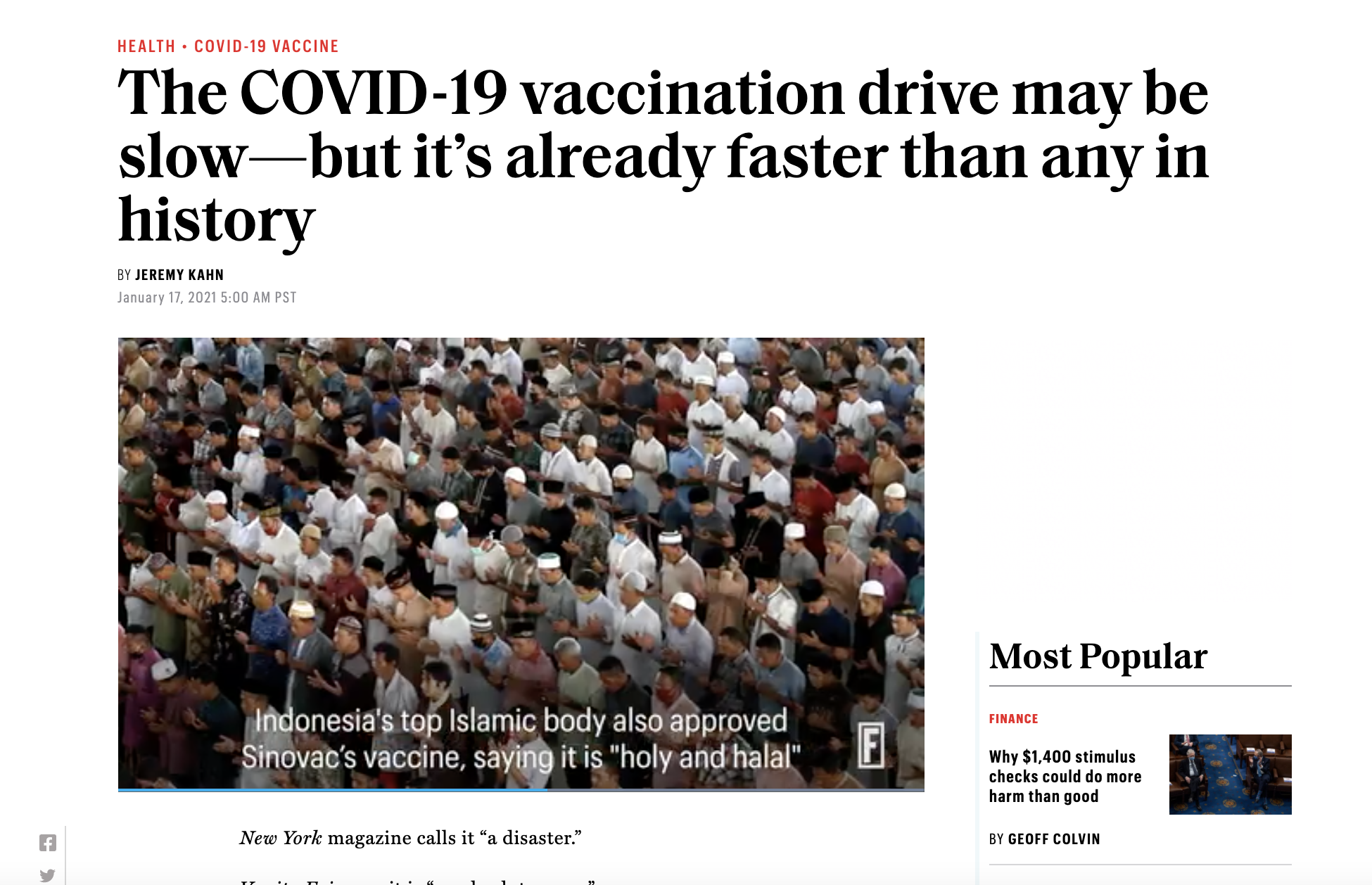 Brought to you by Fortune 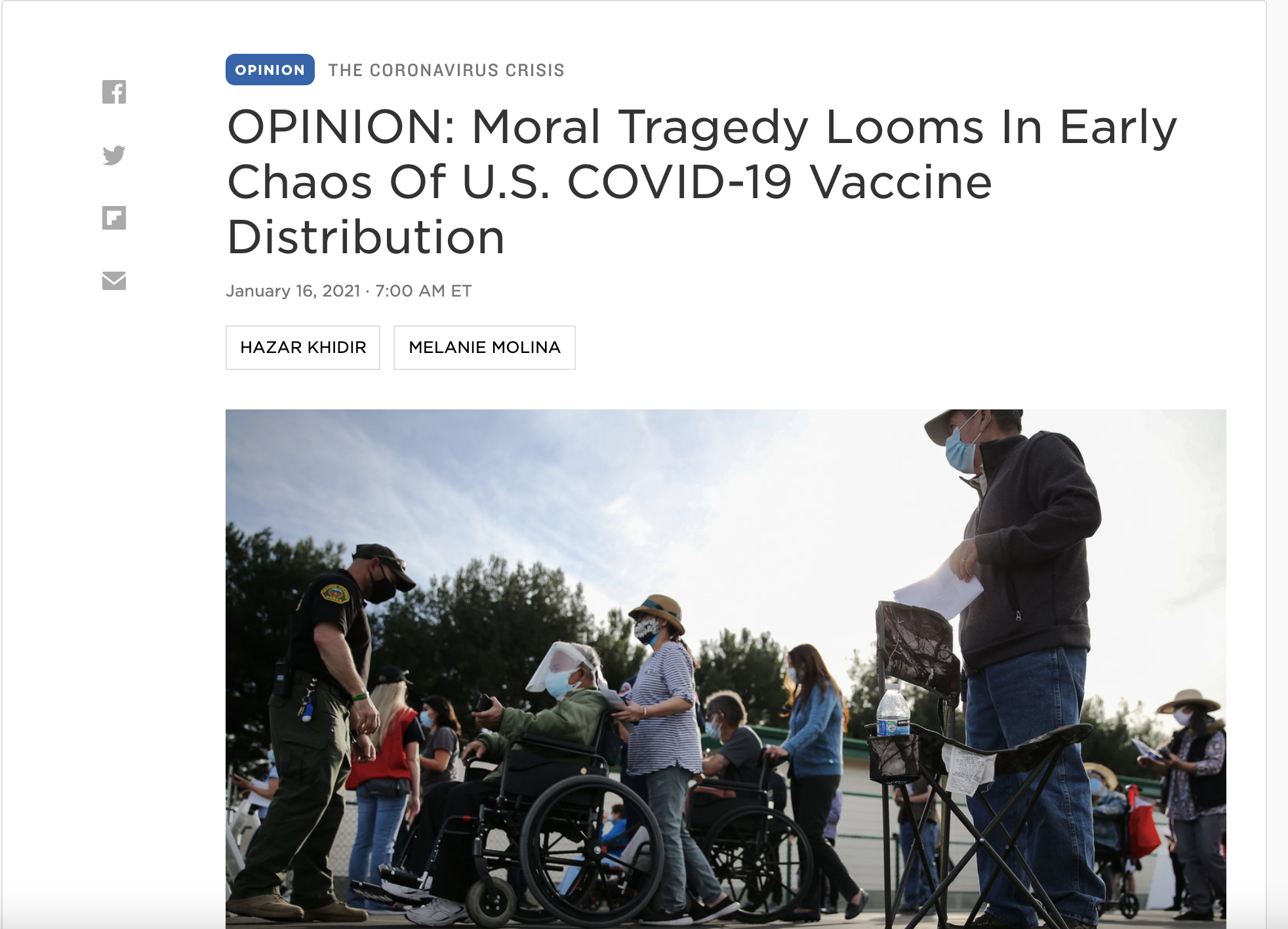 Brought to you by NPR 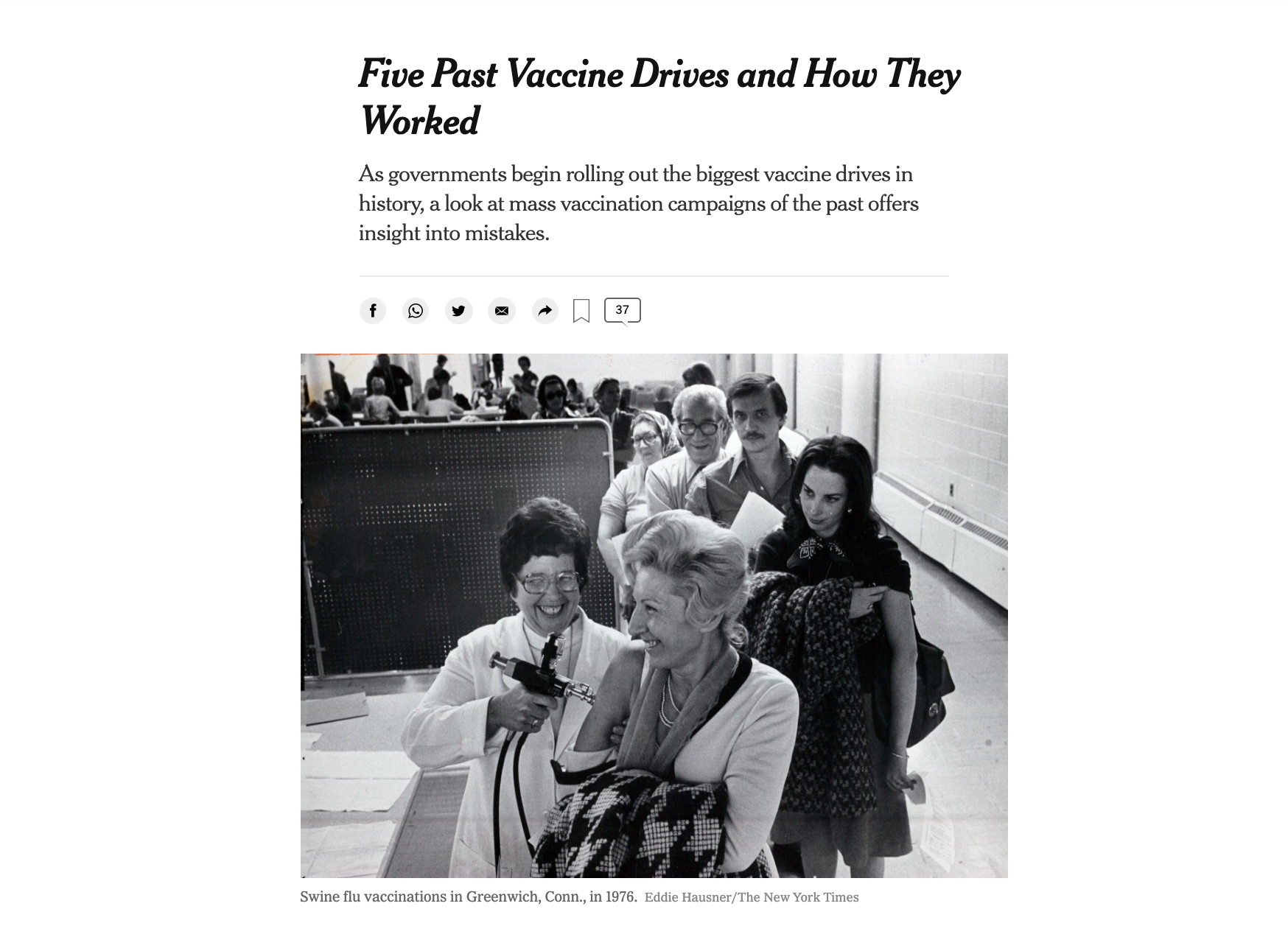 Five Past Vaccine Drives and How They Worked