Developed by Seabourne Consulting, experts in Legacies for Living Together: Understanding Our Shared History

Legacies for Living Together: Understanding Our Shared History

Frank Hillaire Dance Group circa 1930. All videos in this story were produced by Children of the Setting Sun Productions.

In the 1930's my Great Grandfather, Frank Hillaire formed a Lummi song and dance troupe named, “Children of the Setting Sun.” Before passing, my great grandfather left these instructions to his descendants, “Keep My Fires Burning!” As my grandparents and parents before me, we continue to follow these instructions.

We are connected to the past through our family histories and community stories. We know that the decisions of people who have come before us shape our choices, opportunities, and experiences.

But, the power of our legacies are not always acknowledged--and can hide in policies and systems, in the stories we choose to tell or not to tell, even in the words we use to mark the distance between the present and past. Is it the number of years? The number of people? Or something else that brings us closer?

On January 22, 1855, Washington State was formed through the Treaty of Point Elliott.

W’totlhem Jay Julius, Fisherman, Former Chairman of the Lummi Nation, and Setting of the Sun Institute Chief Strategist, reminds us that Washington would not exist without negotiations between the Government of the United States and 30 leaders from the Sovereign Nations living in the territory:

“There are 29 federally-recognized tribes in Washington State. … Every square inch of land in what is now Washington State was owned by some indigenous tribe, so these treaties were necessary for Washington to become a state. … [1855] was a moment in time necessary to have what we have today.” 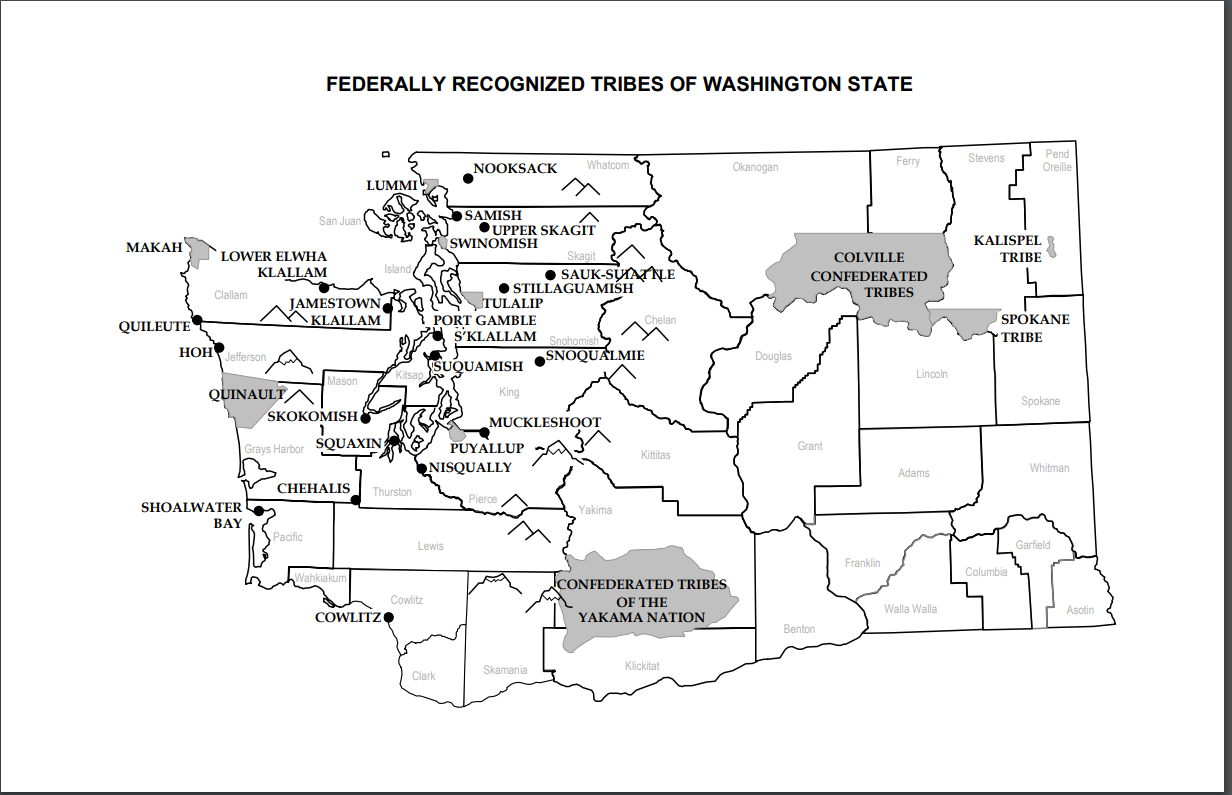 ARTICLE 14. The United States further agree to establish at the general agency for the district of  Puget's Sound, within one year from the ratification hereof, and to support for a period of twenty years, an agricultural and industrial school, to be free to children of the said tribes and bands in  common with those of the other tribes of said district, and to provide the said school with a suitable instructor or instructors, and also to provide a smithy and carpenter's shop, and furnish them with the necessary tools, and employ a blacksmith, carpenter, and farmer for the like term of  twenty years to instruct the Indians in their respective occupations. And the United States finally agree to employ a physician to reside at the said central agency, who shall furnish medicine and advice to their sick, and shall vaccinate them; the expenses of said school, shops, persons employed, and medical attendance to be defrayed by the United States, and not deducted from the annuities.

“Our ancestors were thinking about us,” Si’alheleq Lawrence “Happy” Solomon, Chairman of Lummi Nation notes, institutionalizing in the Treaty the vital conditions community leaders knew they would need to thrive then and now.

The Treaty of 1855 is not an abstract document from the past, but a relationship of shared commitment and connection that impacts the present:

“My grandfather shook hands with Governor Isaac Stevens [...] and I do the same when working with the governor. I believe it was 24 governors ago that my grandfather shook the hand of the then Territory Governor. And, we’re here to try to work together to uphold this treaty that was entered into,” Jay Julius describes.

The Well Being in the Nation (WIN) Network advances intergenerational well-being for all by beginning with a recognition that the legacies of the past have shaped our present—and the decisions we make today will shape the legacies inherited by generations in the future.

Legacies that honor dignity and inclusion strengthen a mutual sense of belonging, an important part of how we strengthen well-being. Belonging expands the circle of those who feel that they are connected with each other and can contribute to the community.

Each step toward full and fair inclusion brings us closer to co-creating thriving places.

This video showcases the power of belonging and connection, as the Rikkole Cree Canoe Club celebrates legacies they are proud to pass along to future generations.

Legacies that inflict trauma and exclusion do the opposite. These legacies amplify adversity by dehumanizing each other, adding to the number of people and places that are struggling and suffering.

When we harm each other, we descend into a self-defeating trap that threatens the well-being of all.

This video exposes the legacies of trauma and exclusion that continue to impact Indigenous women today.

We have the opportunity to create conditions in every community that meet the needs of all now and leave legacies that we are proud to pass along. When we create Legacies for Living Together, we are acknowledging our common fate, our interconnections, and shared responsibility to steward resources now and for generations to come.

The Ferndale School District Community in Ferndale, Washington recognized Treaty Day for the first time in 2020. Students began to hear a different version of history, to begin to understand the history of the Lummi Nation and their own history in a different way.

“Upholding that treaty is part of upholding the promises that our ancestors made. It wasn’t just the Tribes that signed the treaty. It was our ancestors as well,” Sharon Shewmake, State Representative 42nd District.

This video celebrates the inaugural Treaty Day, featuring leaders, traditions, and stories from the Lummi Nation.

“I was one hug away from pre-contact life,” Jay Julius states, reminding us that our past is always in reach.

"My great-grandmother died when I was five and she was born in 1888. And, my great-father [...] was born in 1892 and he, too, died when I was five. So, if you can imagine, I was one hug away from pre-contact life. [My great-grandparents] were raised by individuals who were here pre-contact. So, that kind of puts it in perspective. One might think the Treaty was a long time ago. For us, it wasn't."

About Children of the Setting Sun Productions

The Children of the Setting Sun Productions Inc., follows the Lummi Family tradition of Native Storytelling. By utilizing both traditional and modern art mediums, Setting Sun embraces the instructions left by the great grandfather to keep the family culture alive.