Developed by Seabourne Consulting, experts in Bright Spots in Appalachia

Appalachian Regional Commission | A year ago, a report released by the Appalachian Regional Commission, the Robert Wood Johnson Foundation (RWJF), and the Foundation for a Healthy Kentucky showed that residents of the Appalachian Region, on average, are not as healthy as Americans living in elsewhere in the country. The report, “Health Disparities in Appalachia,” took a broad look at health and examined 41 different health measures, including mortality and morbidity rates, lifestyle choices, health care systems, and social determinants known to influence health outcomes. Of the 41 variables included as part of the study, Appalachia performed worse than the national average on 33.

The county-level data used in the report, which also explored differences within the Appalachian Region, are now available for exploration at the recently released www.healthinappalachia.org, a website developed by members of the Center for Applied Research and Engagement Systems (CARES) and the Institute for People, Place, and Possibility (IP3). With customizable maps and reports, the website allows users to explore the health issues and geographies relevant to them.

In addition to the launch of the interactive website, two additional reports were also recently released, both of which serve as follow-ups to the initial report examining health disparities in Appalachia. The first of these, “Identifying Bright Spots in Appalachian Health: Statistical Analysis,” used regression analysis to determine which of Appalachia’s 420 counties have better-than-expected health, given each county’s characteristics and resource levels. This approach allowed researchers to focus not so much on the shortcomings found throughout the Region, but rather the communities that are making the most out of their resources. 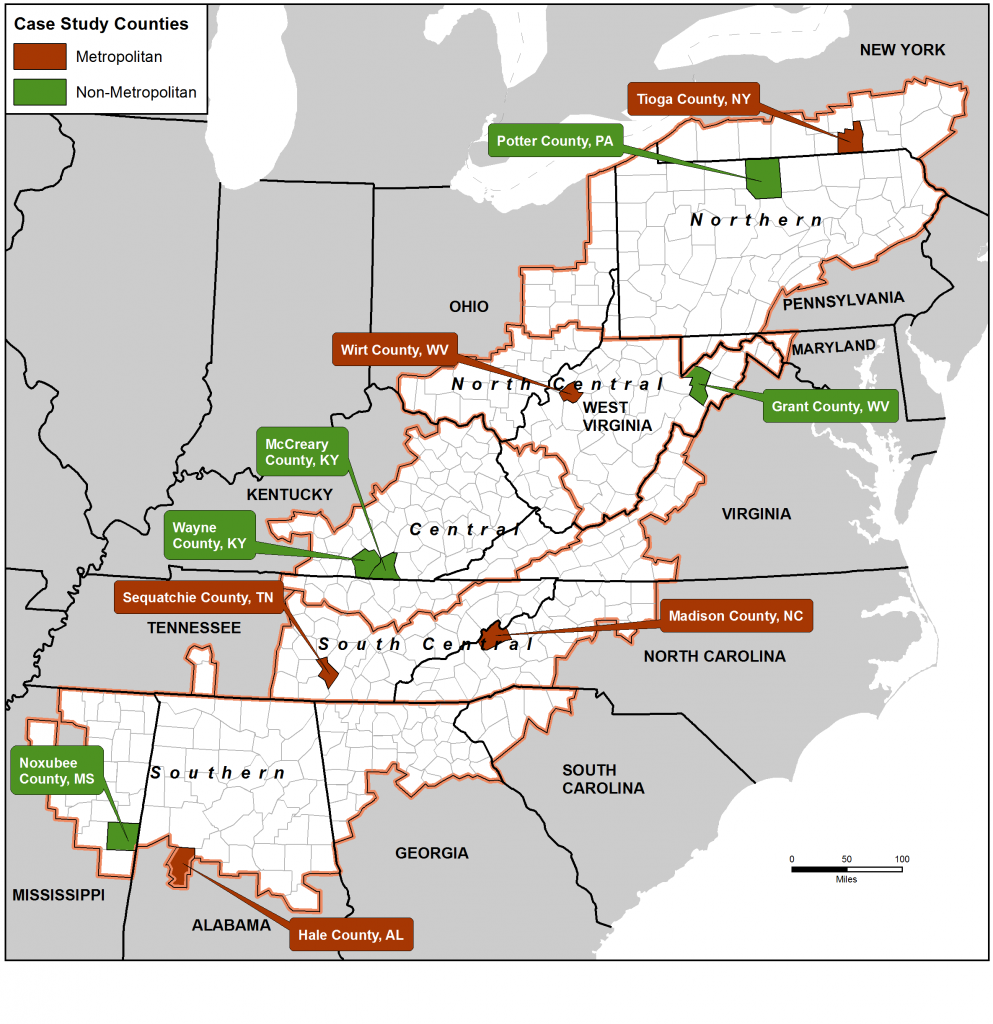 This statistical analysis serves as the foundation on which the third report, “Exploring Bright Spots in Appalachian Health: Case Studies,” is based. In this report, researchers traveled to ten Bright Spot counties—places that were identified, via the statistical analysis, as being in the top tenth in terms of better-than-expected health—and explored the programs, strategies, and attitudes that may be contributing to their better-than-expected health. Though no causal linkages are claimed in the report, many promising findings emerged. Common themes found throughout the ten Bright Spots include:

It’s important to note that while the stories that emerged as part of this research are encouraging, since relative performance is based on resource levels and characteristics, many places with better-than-expected health outcomes are still well below national averages in those same outcomes. So even in these Bright Spot counties, despite residents making the most out of their available resources, much work remains to be done. However, this shouldn’t dampen the findings, which highlight the importance of community initiative and resourcefulness when confronting any health challenge. The project’s sponsors hope that residents throughout Appalachia will take a look at these case studies and envision their own communities undertaking similar initiatives. In many cases, as seen throughout these Bright Spots, a little initiative—along with healthy doses of collaboration and resource-sharing—can go a long way.

Though deficits in health outcomes persist throughout the Region, as highlighted by the initial Disparities report, positive things are happening throughout Appalachia, and those are exactly what the two recently released reports examine: the Bright Spots.