With northern Nevada ranking near the bottom of the list in health outcomes, Renown Health decided to address population health goals to improve the health of those in the community. In 2015, Renown’s strategic plan laid out a distinction between health and health care and began to invest, with its partners, in health outcomes for priority populations. The health system created "Institutes" to focus on improving health for specific groups - starting with children, then focused on services for those with behavioral health and addiction, and seniors.

In September 2016, Renown Health realized it was limited by lack of robust data and would not be able to impact health determinants without a data roadmap. Renown joined forces with Desert Research Institute (DRI), a global leader in environmental data analysis, to launch the Healthy Nevada Project.

The Healthy Nevada Project helps people live healthier and manage health risks while bettering health outcomes at the state level and beyond. Partnerships were integral in this project from the beginning. The Healthy Nevada Project started as an idea between Renown Health’s President and CEO, Anthony Slonim, M.D., Dr.PH., FACHE, and Desert Research Institute’s associate professor, Joseph Grzymski, Ph.D. The two realized that with the wealth of data from DRI’s environmental research and Renown’s electronic medical record there were opportunities to learn and understand more about Nevadans’ health. Renown and DRI now lead a collaboration – Renown Institute for Health Innovation (Renown IHI) – which oversees the Healthy Nevada Project.

A population health study like the Healthy Nevada Project is the ultimate in strategic planning for a health system. As Renown learns more about the diagnoses and conditions that impact its population, the health system can work to make changes to address patient and community needs.

The Healthy Nevada Project aspires to offer genetic testing to every Nevadan who is interested in learning more about their health and genetic profile. The Project is focused on early detection and behavior change in the community to help improve health statewide. Simultaneously, the Healthy Nevada Project will help expand the state's access to leading-edge clinical trials and foster new connections with biotechnology and pharmaceutical companies. With the community’s support and engagement, steps are being taken toward achieving the goals of providing personalized, precision medicine for individuals while improving health statewide.

The Pilot: Successes and Improvements

The pilot phase a test to determine if there was an interest in genetic studies in the community. Originally the pilot was open to 5,000 study participants. Renown hoped to fill this in 6 months – all participant slots were filled in 24 hours. It expanded to 10,000 pilot participants and closed in 48 hours with DNA saliva sample collection completed in 69 working days.

Pilot study participants came from 135 zip codes in northern Nevada. 1,052 of the study participants were residents from rural communities outside of Washoe County (where Renown and DRI are headquartered) such as Fallon, Winnemucca and Yerington. To ensure greater participation from rural areas, Healthy Nevada provided routine testing appointments and traveling testing and outreach during phase two.

The only inclusion criteria for the pilot phase required participants to be 18 years or older. While we saw a wide range of study participants, ranging in age from 18-90 years old, certain age groups were over- and under-represented. Ages 31-70 were overrepresented and those over the age of 70 were underrepresented given the ambulatory requirements to reach our testing facility.

Phase Two: The Next Generation

The pilot phase of the Healthy Nevada Project proved Nevadans are excited to know more about themselves and want to contribute to research that could improve health outcomes for the entire state. This continues to be true with recruitment for phase two of the Project.

In March 2018, the Healthy Nevada Project launched the next generation of this groundbreaking study and invited 40,000 additional northern Nevadans to receive genetic testing at no cost. For phase two, the Project is partnering with Helix, a personal genomics company. Helix operates one of the world’s largest clinical exome sequencing laboratories and proprietary Exome+ technology. This resulted in 100 times more data, so Healthy Nevada Project researchers are able to gain greater insights and engage participants in improving their health, and the overall health of the community.

In phase two, the Project worked to more closely match the makeup of northern Nevada by implementing eligibility requirements surrounding gender, age group, ethnicity and rural versus urban residents. As the Project continued to expand, these requirements were removed and all northern Nevadans over age 18 were invited to participate.

The health care industry is learning that genetic conditions such as hereditary breast and ovarian cancer (HBOC) should be made widely available regardless of risk and be reported back to participants. Therefore, in phase two, the Healthy Nevada Project returned results on clinically actionable data related to CDC Tier 1 conditions including FH (familial hypercholesterolemia), BRCA 1/BRCA 2, and Lynch syndrome back to patients in hopes of encouraging to seek treatment and take action to reduce risk.

Dr. Christopher Rowan, Renown Institute for Heart & Vascular Health cardiologist and Renown IHI medical director of research, is contacting study volunteers who asked to be notified of their risk. Additionally, the Healthy Nevada team is offering genetic testing at no cost to their family who may also be at risk.

The Impact on Health

About 1% of the population (1 in 100) will have a pathogenic or likely pathogenic mutation in one of three serious inherited conditions: Familial Hypercholesterolemia, Hereditary Breast and Ovarian Cancer syndrome, Lynch syndrome. Early detection of these mutations will save lives.

The Project is challenging the enrollment process and ways of reaching people who are interested in participating. The Healthy Nevada Project has several outreach teams who take the enrollment process ‘on the road’ to people’s communities, civic events and local businesses. This is a differentiator from the sometimes rigid process of requiring every participant to come to one location which can often be inconvenient both in location and hours of operation. 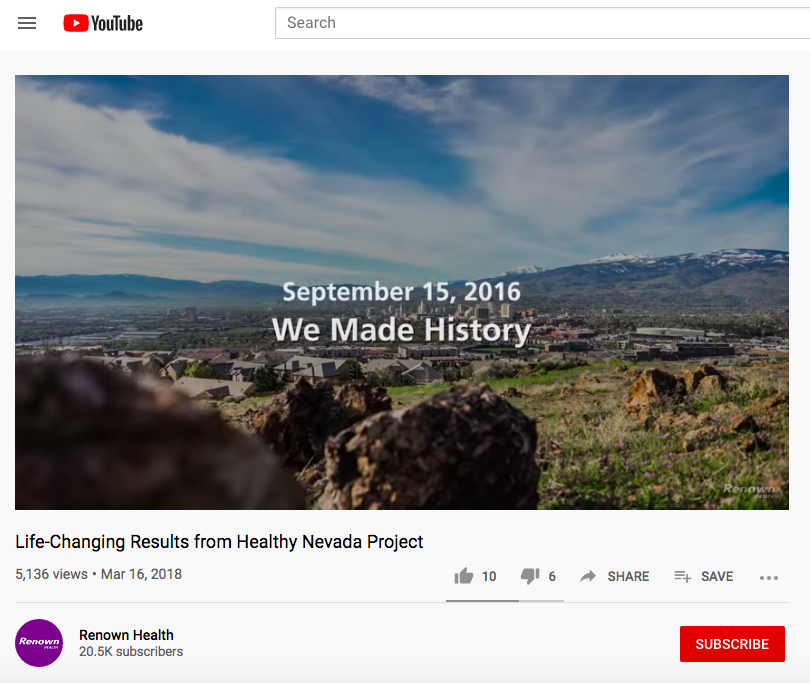 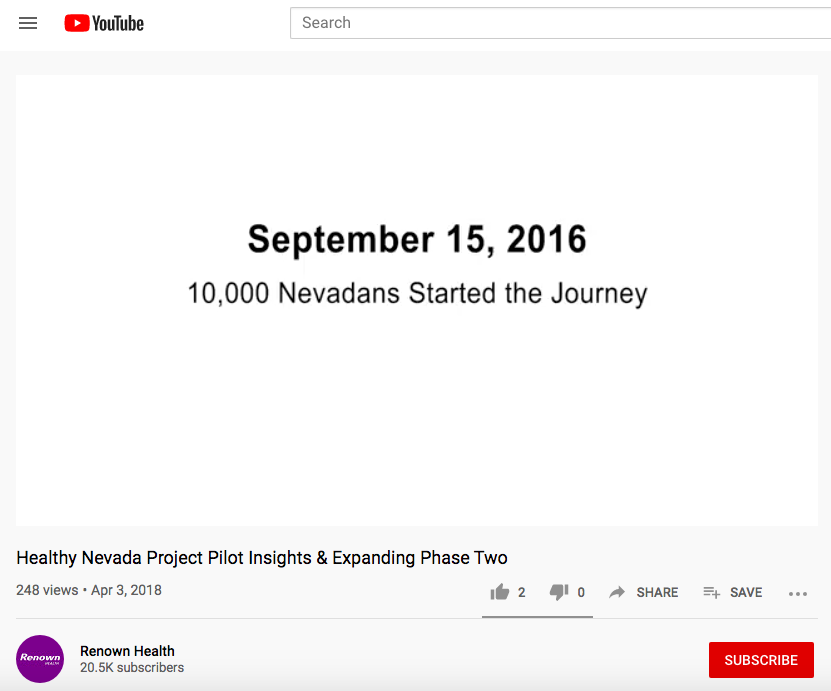 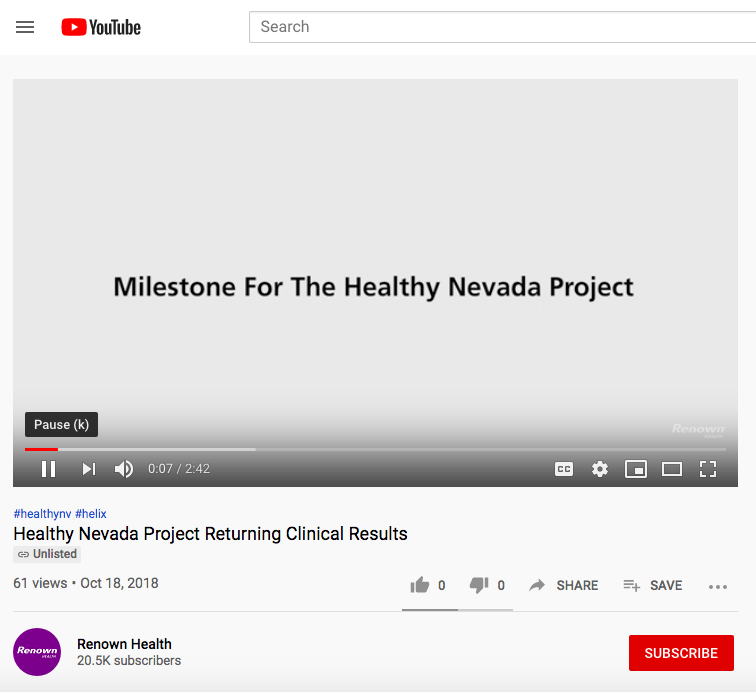 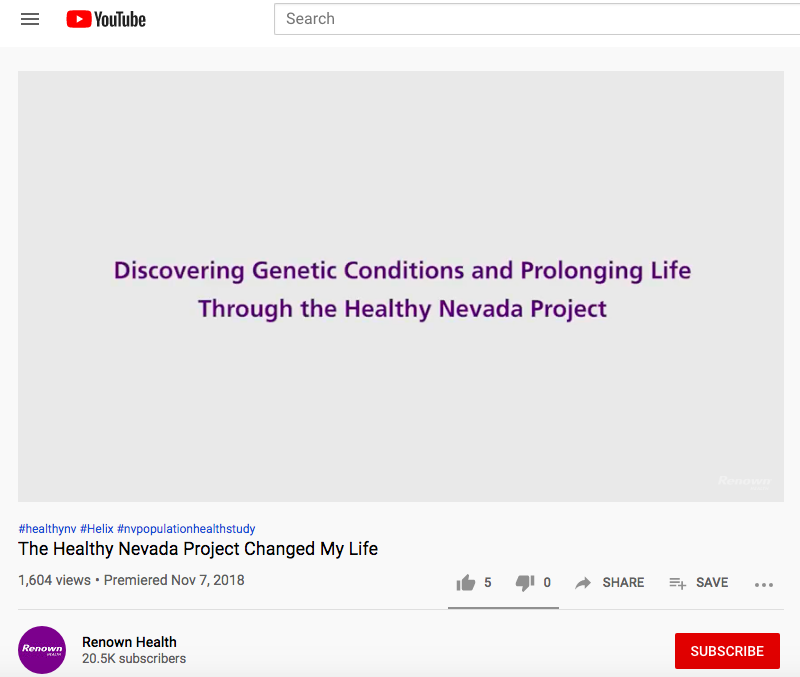