Developed by Seabourne Consulting, experts in From the Ground Up: Improving Community Health Through Collaboration

From the Ground Up: Improving Community Health Through Collaboration

Charles has been both unabashed in sharing his growth and struggle, and consistent in reminding us of the sustaining role the gardens play in people’s lives. He tells us that the garden gives him not only good food to eat, but an outlet and something beautiful. Charles, a recovering addict, clean for more than 5 years, says the garden is his new "positive" addiction.

"What the St. Mary's Nutrition Center provides overall helps in many ways and this community needs that. There have been times in my life that I wanted to die. Now I don't want to die; I want to be happy and to grow."

Charles' story calls attention not just to the seasonal benefit, but the sustaining impact community gardens play in people's lives, and the incredible importance of investing in place, neighborhood, and one another. What would happen if Charles couldn’t walk out his front door and go into his garden? That is why the Nutrition Center works to invest in Lewiston and strives to build healthier lives by collaborating with others to create, coordinate and care for community gardens. 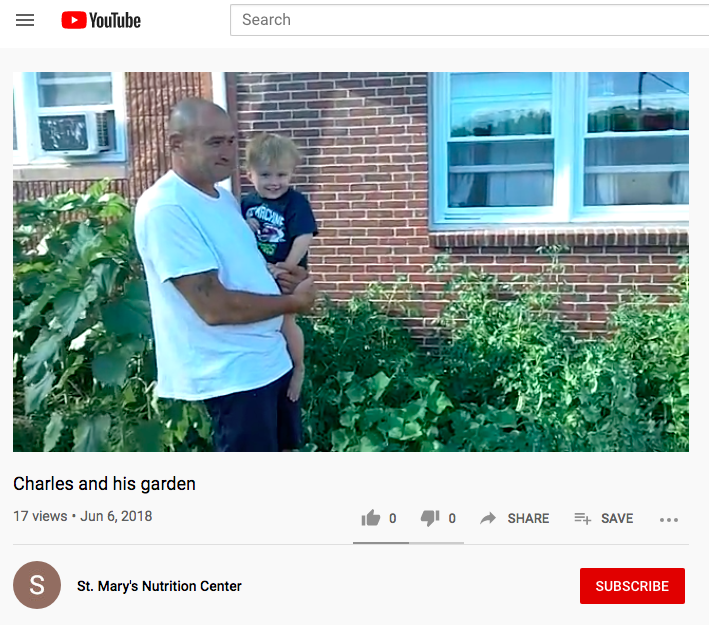 Charles and his garden

Brought to you by St. Mary's Health System

Established by St. Mary’s Health System, a member of Covenant Health, the long-term goal of the Nutrition Center is to build a viable, just food system, while supporting local leaders, strengthening community ties, and engaging youth as agents of change. The Nutrition Center operates on the belief that equity in our food system is deeply tied to inequity within our community, and that a whole-person, and whole-community, approach is critical to creating long-term change. Located in a previously vacant, but beautiful, historic school building in the midst of downtown Lewiston, Maine’s most economically challenged neighborhoods, the Nutrition Center serves families, youth, adults, elders and refugees across the city’s many diverse communities with a focus on those who have limited incomes and an increased risk for food insecurity.

Situated on the Androscoggin River next to its sister City of Auburn, Lewiston was once a thriving mill town. However, by the 1980’s the city suffered a massive manufacturing decline- the economic boom had past, the river was depleted, and the once vibrant downtown centers became blighted. Renewed interest and investment in the region was just beginning in the late 1990’s when in 2001 an influx of African immigrants, primarily from Somalia and Kenya, started to fill the empty houses and invigorate the businesses.

Waves of migration continued thereafter resulting in an estimated 10,000 immigrants and asylum seekers settling in Lewiston-Auburn (L-A). Immigrants came primarily from Central and East Africa and now live alongside descendants from the original Western European and French-Canadian settlers.

The transformation of the demographic and cultural landscape is evident across Lewiston’s main commercial street. Once-vacant storefronts have been filled by small African-owned stores, and more recently, by other entrepreneurs committed to bringing a renaissance to Lewiston's downtown with restaurants, shops, and upper-level apartments and community-centered events.

Unfortunately, despite the increase in investment, poverty and food insecurity remain a serious problem in Lewiston. Of only 36,000 people, almost one-fourth (22.2%) live in poverty. The city’s poverty rate for children under five years old is 48%, twice the state average. Downtown Lewiston is home to three of the poorest census tracts in the state. The number of residents living at 200% below the Federal Poverty Line in these “extreme poverty tracts” reaches 87%.